A Thing of Eternity wrote:Has anyone read the original version of this and the new(er) one? I know that FH went back and did a pretty extensive re-write of this story, I haven't been able to find a copy of the original version and am pretty curious about the changes that he made.

i just bought a copy of this this past weekend. I'll check the publication date on it when i get home cuz it looked like a rather old copy.

There will be an intro from him discussing some of the revisions if it's the revised copy.

Mine is the Revised Berkley Edition, 1978 - and my mistake, there is no intro - he talks about the changes in the Epilogue at the end of the book, check there maybe.

This is getting weird - I have a version with no epilogue, and no mentions at all of any other version (except the GALAXY serialization).

And the last mentioned reprint year in my version is 1985!

Maybe it is a late reprint of the old version - but why not reprint the new one...?
Top

I read both, and I didn't find the differences in the ideas how to create an artificial intelligence or the plot that noticeable. The main difference is that the older version doesn't have the quotes as chapter openings that we all know from Dune and Pandora. FH says (if I remember correctly) that he rewrote to take into account what had been happening with computers, but actually most of the technical description of the Ox and the white box relies on analogy with the nervous system rather than electronics. I don't know what happened in that field in those 22 years.
Top

Thanks for that info. I guess I have to get an old version somewhere and see for myself.

Well, mine does not have the quotes - and seems to be based on a rather old text (from the copyright-year). Must be a reprint of the old version...

My cover is horrible BTW; some green monster in the foreground and evil robot faces in the background. I have no clue why...
Top 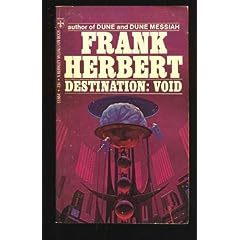 Thats the version I have as well, it's such a crappy printing none of the pages line up and me bindings just so broke. Cool story.

Been awhile since I read Destination: Void but for some reason this thought came to me about the Black Ox; as I recall it is the 'workhorse' for the consciousness principle they are trying to build. It occurs to me that Black Ox is probably supposed to imply Black Box, thus signifying that we really have no clue about the inner workings of consciousness.

Still cool though.
Ah English, the language where pretty much any word can have any meaning! - A Thing of Eternity
Top

That seems a fair assumption, more so given these 2 quoted examples of common use.

Wikipissy wrote:In computer programming and software engineering, black box testing is used to check that the output of a program is as expected, given certain inputs.[4] The term "black box" is used because the actual program being executed is not examined.

In computing in general, a black box program is one where the user cannot see its inner workings (perhaps because it is a closed source program) or one which has no side effects and the function of which need not be examined, a routine suitable for re-use.

I just read this again and I was wondering, did Flatterly's prayer while while Bickel performed the White Box - Black Box transfer cause Ship's God complex?

franks usually very certain in these regards.
obviously yes or skoffed as obviously no

his mysterys were elsewhere

i read this series out of order,
started with the jesus incident and only read void after ascention

one of the standouts was flattery awakening to himself there in the begining of jesus as ship used the machines to awaken him out of hibernation. something about the process pushed him over the edge in capitulation to ships manipulation. seemed like alot of work to go through given ships power but i guess that the drawback gods have in working with lessors creatures whos free choice they wish to preserve to some degree
Top

Freakzilla wrote:I just read this again and I was wondering, did Flatterly's prayer while while Bickel performed the White Box - Black Box transfer cause Ship's God complex?

This is based on The Jesus Incident to an extent, but I don't know that Ship had a God 'complex.' I think we were being led to see that nothing in the universe is truly separate and that only with heightened awareness can we realize that we have connections with things that seem far away. The poet in TJI (forget his name) has a greater sense of this connection than most, but I take Ship to be the one with total connection to it, to the point where it has the computational power to be aware of all of the rest of creation as a single reality (near and far, future and past). I think this is supposed to be somewhat in the same vein as the KH in Dune, but the 'perfected version' of it. D:V seems to refer to this awareness as being 'really conscious', and that none of us is yet, meaning there's a whole network out there of which we're unaware (a net-work..."net"...get it??).

I don't know how much we need to assume of the preceding stuff, but my interpretation is not so much that Flattery caused Ship to think anything particular, but rather that Ship received his prayer in the sense of Ship having been in touch with the interconnected reality and sensing the prayer. I think this is probably the reason Flattery would be picked for TJI, but I'm not sure it was related to Ship's awakening.
"um-m-m-ah-h-h-hm-m-m-m!"
Top

the poet and his girl had so much going for them, and then what?

distrans wrote:I found it that the characters in this series lost my interest in relation to how much exposure they had to ships spoken word

the poet and his girl had so much going for them, and then what?

It's true that I find some of them not fleshed out in a way that makes them interesting in and of themselves. For instance I'm not sure that Jesus Lewis is really developed as a character. But why do you say that Ship abandoned them as a lot?
"um-m-m-ah-h-h-hm-m-m-m!"
Top

as I recall didn't ship snatch flattery and leave the system never to return?
Top

Leaving is not the same as abandoning.
"... the mystery of life isn't a problem to solve but a reality to experience."

Leaving is not the same as abandoning.

Exactly. The ending isn't supposed to be a simple, easy-to-understand resolution. The fact that Panille and potentially others are now hooked into the 'tree of life' (or whatever) means that potentially they're on their way to waking up in part of the way in which Ship was completely awake. I think that perhaps there's an analogy here between Christ coming to mankind and then leaving once they had their instructions, and Ship in this instance leaving once they have their own foothold in awareness.
"um-m-m-ah-h-h-hm-m-m-m!"
Top

i don't recall a pray ever being answered again...
Top

distrans wrote:i don't recall a pray ever being answered again...

Heh, I still need to re-read The Lazarus Effect so I'll let you know what I gather from it when I do.
"um-m-m-ah-h-h-hm-m-m-m!"
Top

I don't think there's any sign of Ship for the rest of the series after it leaves Pandora.

in fact this whole universe did

This series reminds me of Ender's Game in how the first book was great then it went totally off the rails.

Paul of Dune was so bad it gave me a seizure that dislocated both of my shoulders and prolapsed my anus.
~Pink Snowman
Top
Post Reply
28 posts

Return to “Other Books by Frank Herbert”